“The Aquarian Theosophist” Announces a
Project to Defend the Truth About H.P. Blavatsky
Jerome Wheeler 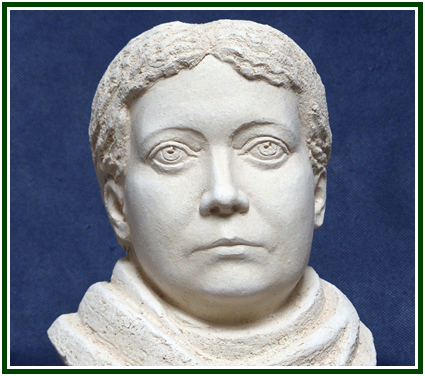 H. P. Blavatsky, in a work by Ukrainian sculptor Alexey Leonov
000000000000000000000000000000000000
A 2016 Editorial Note:
The following text is reproduced from
“The Aquarian Theosophist”, June 2005
edition, p. 19. The intended book was published
in October 2013, under the title of “The Fire
and Light of Theosophical Literature”.
However, after Jerome had a health problem
in 2006, the resources raised by him were
placed in  the hands of “Theosophy Company”,
Los Angeles, and were not used in the defense
of HPB. The book “The Fire and Light” was
published with resources independently raised by
the Portuguese-Brazilian Associates of the ULT,
as explained in the chapter one of the book.
A small portion of the Fund raised by Jerome was
requested by its donors to be returned, and was duly
given back to them. As of 2016, the episode remains
as a karmic enigma and a warning for those who defend
HPB or the truth. They must be ready to face obstacles.
0000000000000000000000000000000000000000000000000
This will announce the above named defense fund which has only one purpose – to raise $10,000 in order to publish an authentic Volume I of HPB’s Letters.
While the discussion of the spurious volume printed last year by The Theosophical Publishing House is valuable, still it leaves one with the uneasy sense that nothing will be accomplished by complaint alone. The best way to arrest a disruptive cause already in motion, is to set up a new one to correct the problem.[1] Those responsible for publishing the fraudulent volume are no more ready to undo their work than the publishers of the spurious “The Secret Doctrine” were 100 years ago.
There is an irony about this announcement as it is a repeat in miniature of what happened approximately 100 years ago. In 1905 or thereabouts a very small group of serious students came to the conclusion that the only way to get H. P. Blavatsky’s original “The Secret Doctrine” back in print was to do it themselves. It took them 20 years to raise the necessary funds for such an expensive undertaking, but they persevered and in 1925 the first facsimile release of HPB’s original “The Secret Doctrine” saw the light of day. It is still in print; in fact, two publishers, The Theosophy Company and Theosophical University Press, have it on their booklist.
“The Aquarian Theosophist” will print a thermometer in each of its Supplements showing what progress toward the goal is being made. Checks, etc. can be made payable to Jerome Wheeler [Blavatsky Defense Fund], and mailed to –
Blavatsky Defense Fund
Attn. Jerome
245 West 33rd Street
Los Angeles, CA 90007-4108
U. S. A.
Please indicate whether you desire the gift acknowledged as:
1. Anonymous
2. With Initials only
3. With full name.
Donations are not tax-deductible.
HPB’s practice in “The Theosophist” and “Lucifer” of publicly acknowledging donations will be used, giving all of us a record of the finances. The idea of transparent financial operations is becoming more popular as the new cycle gains momentum.
As the volume will NOT be facsimile, some ideas of its proposed contents are: In the foreword to the volume there will be two items written by Madame Blavatsky. They are:
1.“Why I Do Not return to India”
2. Madame Blavatsky’s  March 11, 1885 letter to Colonel Olcott.
Both these items describe the necessary attitude of a student seeking the Spiritual Path. It will not contain the Solovyoff series. An appendix containing HPB’s letters detailing why Solovyoff is an unreliable purveyor of information will be included along with reasons for omitting the “Russian Spy” item.
Most remaining letters of the 1861-1879 period will be included, but with carefully written introductions.
We are open to suggestions on how to improve the power of this proposed volume. If other groups wish to co-sponsor such a work, so much the better.
Yours sincerely and fraternally,
Jerome
NOTE:
[1] “For it is written: ‘Teach to eschew all causes; the ripple of effect, as the great tidal wave, thou shalt let run its course.” (“The Voice of the Silence”, second Fragment.)
000
On the role of the esoteric movement in the ethical awakening of mankind during the 21st century, see the book “The Fire and Light of Theosophical Literature”, by Carlos Cardoso Aveline.