What Matters is Less
Ourselves and More Our Work
C. Jinarajadasa 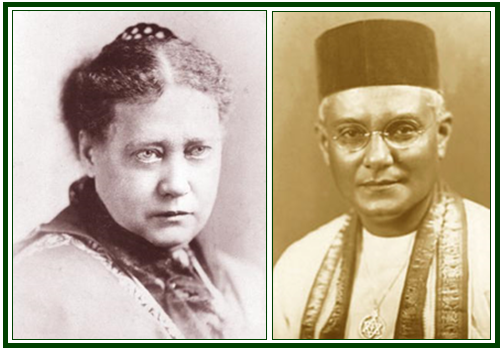 Helena Blavatsky  (1831-1891)  and C. Jinarajadasa
A 2016 Editorial Note:
C. Jinarajadasa (1875-1953) was the third international President of the Adyar Theosophical Society and personally followed the pseudo-theosophy created by Annie Besant and her associates. In the early 1920s, Jinarajadasa was already an influential leader in Adyar. He had an eclectic view of philosophy and played a key role in the process of re-establishing some contact between Adyar and the original teachings of Theosophy.
He certainly did not study true esoteric philosophy. He is frank enough in the following notes to admit, while referring to Helena Blavatsky: “It is far more her personality which has fascinated me and less her wonderful teachings…”.
However, Jinarajadasa preserved, edited and published many letters from the Masters of the Wisdom and documents by Helena Blavatsky. He initiated the historically important trend in the Adyar Society to pay at least some attention to the true teachings.
While obedient to the false clairvoyants and believing in their frauds, he never played a key role in the absurdities fabricated by the main Adyar leaders in the period between 1911 and 1934.
After that, C.J. was influential in starting the way back to a (modest) degree of common sense. He felt real respect and admiration for H.P. Blavatsky. Thanks to his editorial work, the task of students and researchers working with true theosophy became considerably easier.
The present article is reproduced from “The Theosophist”, Adyar, August 1965, pp. 293-294. It was also published at “The Aquarian Theosophist”, in July 2012, pp. 14-15.
(Carlos Cardoso Aveline)
000
The Heroic Nature of H. P. Blavatsky
C. Jinarajadasa
I was only fourteen when I met H. P. Blavatsky. But ever since then I have been fascinated by her.  It is far more her personality which has fascinated me and less her wonderful teachings, for her personality shows the great qualities of a hero.
To understand her heroic nature, we must remember a few facts which perhaps are not all to be found in published books. Occult tradition states that, after her training in Tibet under her Master, she was sent out on what then seemed a forlorn hope. In 1870, when she started on her mission, Materialism was the coming Gospel of Life. She was given the work of stemming the tide of Materialism with the occult knowledge which she possessed. She was not told how the work was to be done, except in 1874 when she was informed that a certain H. S. Olcott would assist her.
But as she went out to do her work, she knew quite well the awful sufferings in store for her. She knew that she would be considered a fraud, a trickster, be vilified, and that in every possible way her name would be dragged in the mud. She knew that she would have to do many things using occult forces, and since she was not able to reveal all the truth concerning those forces,  that her actions would often appear suspicious and fraudulent. She had made a pledge, and in the face of this destiny of misunderstanding, she went straight to her goal of martyrdom.
It is this intense devotion to the Cause of Humanity, and the unswerving loyalty to the orders of her Master, which stand out in her character. Her health was wretched and she suffered terribly, but yet never for one moment did all her agonies make her forget the pledge she had given to lead the forlorn hope.
Even in 1885, when the attack on her of the Christian missionaries caused her agonies and she lay dying, she did not forget her work. For her Master then appeared to her and offered her the choice of dying and so being relieved from her miseries, or of living on with broken health in order that a signal piece of work for mankind, the writing of “The Secret Doctrine”, might be done, and she chose to suffer once again. He showed her pictures of the sufferings still in front of her, but she chose that suffering rather than leave unfinished a part of her work for mankind.
It is this unflinching loyalty of hers to a great Cause which ever fascinates me. We, who are lesser in stature, are often apt to forget, when surrounded by difficulties, and particularly by humiliations, that what matters is less ourselves and more our work.
Our true aim should be to dedicate ourselves to our work at all cost. When that work of ours is broad-based to serve all mankind, then our character becomes indeed heroic. I think more and more as men understand all the details of her life and work, H. P. Blavatsky will be recognized as one of the great heroes of humanity.
000