Ancient and Modern Immortals
Live in the Karakorum Mountains
Amaravella 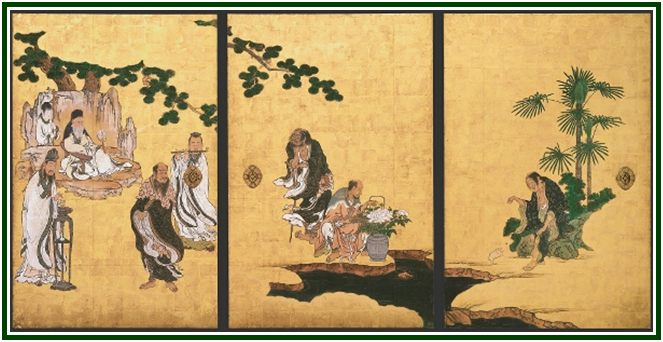 Partial view of a traditional painting with images of Taoist Immortals
000000000000000000000000000000000000
An Editorial Note:
The following text was first published
in the January 1889 edition of “Lucifer”
magazine, London,  p. 372. [1]
The word “Amaravella” was used as a pen-
name by the theosophist Edward J. Coulomb.
There is a reference in the second paragraph
of the article to the fact that the “Kwen-Lun”
or Karakorum [2] Mountains are the region
where the Taoist Immortals live. In the volume
“The Mahatma Letters” [3], one Master of the
Wisdom refers to a journey he was making through
the Kouenlun or Karakorum  mountains, on his
way home. The passage clearly implies that he and
some of his colleagues lived in such mountain range.
(Carlos Cardoso Aveline)
000000000000000000000000000000000000000000000000
Although belief in the existence of “Masters of Wisdom” is a matter of personal conviction, reasoning, and experience, it is easy enough to collect historical proofs that such a belief has existed in all ages and nearly in all countries. Not only in the tradition living to this day in India, but the oldest legends in the world, those of the Chinese, and the works of the Taoist Mystics, nearly all revolve around this particular belief.
It is in the “Kwen-Lun” mountains (Karakorum), in Eastern Thibet, that the Chinese locate the source of their great mystic and alchemical learning. The “Kwen-Lun” was, like the Indian Meru, the central point whence sprang the “Four great rivers”, exoterically as well as esoterically. It was the sojourn of the “Tsien” or Immortals, who cultivated upon its slopes the Sesamum and Coriander, the grains which conferred longevity on those who fed upon them.
There also flowed the inexhaustible “Fount of Youth”, while the most precious stones strewed the walks in the luxurious gardens of the “Happy Land”. The “Tsien”, like the Lha of Tibet, were not, as generally supposed, merely ethereal Beings or spirits, although some of them were certainly immaterial. There were two classes of terrestrial “Tsien”, the “Jin-Tsien”, or disembodied human genii (Nirmanakayas), and the “Ti-Tsien” or embodied Immortals (Mahatmas).
The Taoists revere amongst their Saints seven patriarchs and two female adepts, who deserved, after having spent their lives in teaching Humanity, to join the ranks of the Tsien.
The great Lao-Tzu also, the Founder of Taoism, after having written his “Tao-TE-King”, retired to the “Kwen-Lun” mountains, and was never heard of more. One of his followers, “Lieh-Tseu”, author of a very deep metaphysical system and of the “Tchoung-Hui-King”, went to question the keeper of the pass through which “Lao-Tseu” had disappeared. With much reticence and hesitations, “Yin-He” told him marvellous things about the Tsien who dwelt beyond. “A Tsien is a man who had a former existence in the world of spirits, is born into the world either on account of some indiscretion or for some benevolent purpose, usually in some lowly situation. He early begins to show a predilection for things mysterious, to receive visitors from the unseen world, to practice Alchemy and the healing art, to prepare and use certain drugs and charms of which no one knows the use or the virtue but himself, and the more advanced Genii from whom he gets from time to time instruction and assistance. After this he gives up human food and all ordinary human occupation” (See Denys’ “Folklore in China”) … He even gives up breathing, and thus acquires extraordinary powers, such as passing freely through the air and fire, plunging  into the earth or ocean, and commanding the most powerful demons. After a life of many hundred years, he ascends to heaven on the back of a dragon. The allegory is transparent: he ascends to bliss owing to the acquirement of Wisdom, symbolized by the dragon; Yin-He adding that those acquisitions were only possible to those whose Soul has become perfectly pure.
At the head of the Tsien reigned “Muh-Kung”, the first creative principle evolved from Chaos, and his wife “Si-Wang-Mu”, the first created principle, whose orders were transmitted all over the Earth by azure-winged birds. Azure was the colour of Astral Light, “Hiouan-Pin”, the blue mother.
In the “Chinese Readers’ Manual”, by W. F. Mayers, many interesting legends are found, showing that the powers which Theosophy attributes to Adepts, such as separation of the Mayavi-Rupa, Psychic Telegraphy, and voluntary reincarnation in chosen bodies, as well as Mediumship, Clairvoyance, Mesmerism and Geomancy (See Doolittle, Eitel, etc.), were well known in China thousands of years ago. There was a province peopled with Magicians-born, the “Maa-Shan” or Giants. Another legend, perhaps a remembrance of Atlantis, people with Genii the “San-Sen-Shan” or Fortunate Islands of the Eastern Sea.
NOTES:
[1] The word “Lucifer” means “light-bearer” and refers to the planet Venus, “the star that brings the new day”. This ancient term has been distorted by misinformed Christians.
[2] The Karakorum or Karakoram is a large mountain range. The Encyclopaedia Britannica, online edition, says: “The borders of Tajikistan, China, Pakistan, Afghanistan, and India all converge within the Karakoram system, giving this remote region great geopolitical significance.”
[3] “The Mahatma Letters”, TUP, Pasadena, 1992, Letter IV, p. 12.
000
In September 2016, after a careful analysis of the state of the esoteric movement worldwide, a group of students decided to form the Independent Lodge of Theosophists, whose priorities include the building of a better future in the different dimensions of life.
000