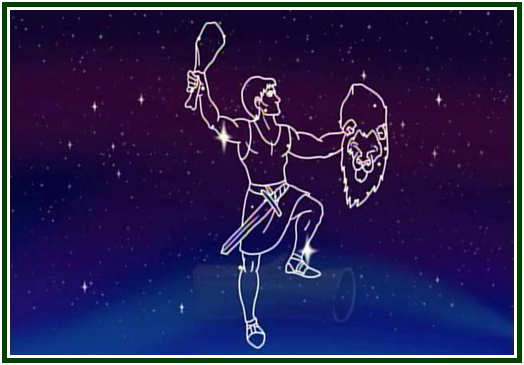 Orion the Hunter, in one of the many possible drawings of him
Editorial Note:
“The Occultation of Orion” starts with a description of the Pythagorean Music of the Spheres, and concludes with an angel, or divine intelligence, proclaiming the end of the reign of violence on Earth.
Longfellow writes this opening note to the poem:
“Astronomically speaking, the title is incorrect, as I apply to a constellation what can be properly applied to some of its stars only. But my observation is made from the hill of song, and not from that of science, and will, I trust, be found sufficiently accurate for the present purpose.”
In Greek Mythology, Orion was the son of Neptune. His father gave him the power of wading through the depths of sea, and he was a mighty hunter, as Bulfinch says. [1]
Orion loved Merope, the daughter of Oenopion, who didn’t like the idea and deprived Orion of his sight. Later on, thanks to the help from Vulcan, Orion was given his sight back by the Sun.
Bulfinch adds:
“After this he dwelt as a hunter with Diana, with whom he was a favourite, and it is even said that she was about to marry him. Her brother was highly displeased and often chid her, but to no purpose. One day, observing Orion wading through the sea with his head just above the water, Apollo pointed it out to his sister and maintained that she could not hit that black thing on the sea. The archer-goddess discharged a shaft with fatal aim. The waves rolled the dead body of Orion to the land, and bewailing her fatal error with many tears, Diana placed him among the stars, where he appears as a giant, with a girdle, sword, lion’s skin, and club.  Sirius, his dog, follows him, and the Pleiades fly before him.”
In Theosophy, the Pleiades are seen as a source of guidance and inspiration for mankind.
The poem is reproduced from “The Works of Henry Wadsworth Longfellow”, The Wordsworth Poetry Library, U.K., 1994, 886 pp., pp. 127-128.
(Carlos Cardoso Aveline)
000
The Occultation of Orion
I saw, as in a dream sublime,
The balance in the hand of Time.
O’er East and West its beam impended;
And day, with all its hours of light,
Was slowly sinking out of sight,
While, opposite, the scale of night
Silently with the stars ascended.
Like the astrologers of eld,
In that bright vision I beheld
Greater and deeper mysteries.
I saw, with its celestial keys,
Its chords of air, its frets of fire,
The Samian’s great Aeolian lyre,
Rising through all its sevenfold bars,
From earth unto the fixed stars.
And through the dewy atmosphere,
Not only could I see, but hear,
Its wondrous and harmonious strings,
In sweet vibration, sphere by sphere,
From Dian’s circle light and near,
Onward to vaster and wider rings,
Where, chanting through his beard of snows,
Majestic, mournful, Saturn goes,
And down the sunless realms of space
Reverberates the thunder of his bass.
Beneath the sky’s triumphal arch
This music sounded like a march,
And with its chorus seemed to be
Preluding some great tragedy.
Sirius was rising in the east;
And, slow ascending one by one,
The kindling constellations shone.
Begirt with many a blazing star,
Stood the great giant Algebar,
Orion, hunter of the beast!
His sword hung gleaming by his side,
And, on his arm, the lion’s hide
Scattered across the midnight air
The golden radiance of its hair.
The moon was pallid, but not faint;
And beautiful as some fair saint,
Serenely moving on her way
In hours of trial and dismay.
As if she heard the voice of God,
Unharmed with naked feet she trod
Upon the hot and burning stars,
As on the glowing coals and bars,
That were to prove her strength, and try
Her holiness and her purity.
Thus moving on, with silent pace,
And triumph in her sweet, pale face,
She reached the station of Orion.
Aghast he stood in strange alarm!
And suddenly from his outstretched arm
Down fell the red skin of the lion
Into the river at his feet.
His mighty club no longer beat
The forehead of the bull; but he
Reeled as of yore beside the sea,
When, blinded by Oenopion,
He sought the blacksmith at his forge,
And, climbing up the mountain gorge,
Fixed his blank eyes upon the sun.
Then, through the silence overhead,
An angel with a trumpet said,
“Forevermore, forevermore,
The reign of violence is o’er!”
And, like an instrument that flings
Its music on another’s strings,
The trumpet of the angel cast
Upon the heavenly lyre its blast,
And on from sphere to sphere the words
Re-echoed down the burning chords,-
“Forevermore, forevermore,
The reign of violence is o’er!”
NOTE:
[1] See “Greek and Roman Mythology”, Thomas Bulfinch, Dover Publications, N.Y., 2000, pp. 165-166.
000
E-Theosophy e-group offers a regular study of the classic, intercultural theosophy taught by Helena P. Blavatsky (photo).