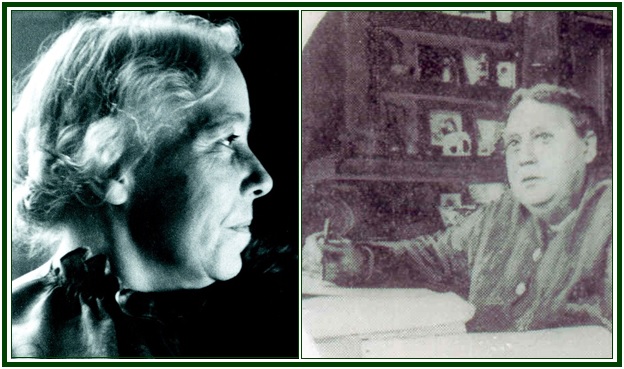 Karen Horney (left) and Helena Blavatsky
Is there a problem of personal vanity among theosophical leaders? Does lust for power exist in esoteric associations, especially in those larger ones where politics and politicking are influential?
Most people who know the movement will say a realistic “yes” to both questions.
Whited sepulchres are easy to find. Especially since the beginning of the 20th century, many have had personal imaginary talks with masters of the wisdom, and some have even attained a number of fake initiations. Clairvoyance of the lower and imaginary kind has spread among groups of good-willing persons who search for the spiritual path.
The neurotic or unnatural love of power and “control” is present today in most human communities and relationships. This largely subconscious disease is also influential in the biggest international associations of theosophists, and in most local groups around the world. However, theosophists have unique tools to deal with it and to share the healing process with others.
The delusion of political power and “personal prestige” is far from incurable: a few common-sense steps must be taken so that its process is understood and the communities of theosophy students get healed from such a subtle poison.
There is an emotional chain of causation beneath the outer phenomena of personal ambition, “spiritual” pride, the illusion of “looking like a saint to others”, and related ailments.
A Psychoanalytic view of the human lower self can help people see the personal frailty behind the social mask used by “esoteric politicians”.
Karen Horney writes:
“The striving for power serves in the first place as a protection against helplessness, which (…) is one of the basic elements in anxiety.” [1]
She adds:
“…The neurotic [individual] will desire to have control over others as well as over himself.” [2] He “develops a stringent need to impress others, to be admired and respected.”[3]
This, of course, is not limited to leaders of associations whose aims are altruistic. It potentially applies to every human group with whatever goals, and every member of them, not just leaders. Theosophists, however, can be more conscious of the problem than the average person.
The creation of a self-idealized personality is a popular form of illusion. Many esotericists try to escape from confronting their ignorance through attachment to naïve forms of devotion, by following fake forms of spirituality based on blind belief, and with the help of an artificially idealized image of themselves, as if they were spiritualized individuals and highly evolved beings who are entitled to pretend they are “above human failures”.
Referring to the kind of person whose intense love of power and prestige is an escape from deep subconscious fear in any area of activity, Karen Horney wrote:
“For purposes of mere description such a person could be called narcissistic. If he is considered dynamically, however, the term is misleading because, though he is constantly preoccupied with inflating his ego, he does it not primarily for the sake of self-love, but for the sake of protecting himself against a feeling of insignificance and humiliation, or, in positive terms, for the sake of repairing a crushed self-esteem.” [4]
An enhanced contact with the higher self brings about the healing in theosophy. An awareness of human misery and self-delusion is an important element to change ignorance into wisdom by humbly renouncing selfishness and improving psychic energy patterns along the path to an enlightened view of life.
A real contact with sacred wisdom makes one feel humble, leading him to accept his mistakes and thankfully try his best each day.
The teachings of Helena Blavatsky and her Masters are clear about that. The presence of personal vanity or pride means the individual is still far from the divine presence. Common sense will show the way ahead, if one’s approach to the theosophical teachings is practical and takes place in constant dialogue with daily life. By learning from his defeats, the pilgrim attains a lasting victory.
NOTES:
[1] “The Neurotic Personality of Our Time”, Karen Horney, Routledge & Kegan Paul, London, 1977, 300 pp., see p. 166.
[2] “The Neurotic Personality of Our Time”, Karen Horney, p. 167.
[3] “The Neurotic Personality of Our Time”, Karen Horney, p. 171.
[4] “The Neurotic Personality of Our Time”, Karen Horney, p. 172.
000
The above text was first published in the April 2017 edition of “The Aquarian Theosophist”, pp. 12-14. It had no indication as to the name of the author.
Read also in our associated websites the articles “A Psychoanalysis of Religions” and “Freud on Freedom From Delusion”.
000
On 14 September 2016, after examining the state of the esoteric movement worldwide, a group of students decided to found the Independent Lodge of Theosophists. Two of the priorities adopted by the ILT are learning from the past and building a better future.
000