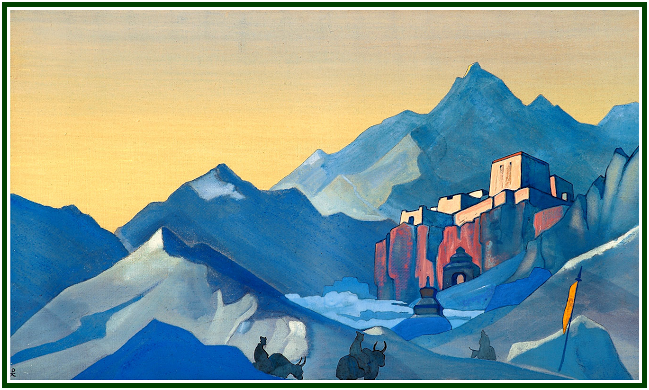 The Himalayas, in a Painting by Nicholas Roerich
0000000000000000000000000000000000000000000000000
An Editorial Note:
The following document is reproduced
from “The Aquarian Theosophist”, October
2012 edition. It consists of Letter 24, First Series,
“Letters From the Masters of the Wisdom”, T.P.H.,
Adyar, India, 1973, pp. 58-60. Apart from its value for
students of esoteric philosophy for showing the reality
and the dangers of discipleship, the letter is also a
document that makes a clear contrast between a real
Mahatma and the imaginary Masters fabricated by
Annie Besant and her associates in the 1900-1934 period.
In the Buddhist “Dhammapada” one can read:
“If you see an intelligent man who detects faults and
blames what is blameworthy, follow that wise man. Value
him as a revealer of hidden treasure. He will be beloved
by the good; by the bad he will be hated. Let such a man
admonish, let him instruct, let him forbid what is improper.”[1]
In Theosophy, as in Buddhism, truth comes first
and is more important than public relations exercises.
In order to make it easier to have a contemplative
view of the text, we have divided the letter in smaller
paragraphs. We add a few explanatory footnotes.
(Carlos Cardoso Aveline)
0000000000000000000000000000000000000000000000000000000
“…Rather than go about preaching
with a heart and a life that belie your
professions – conjure the lightning to strike you
dead, for every word will become your future accuser.”
(A Mahatma)
[To a Chela]
So then, you really imagined when you were allowed to call yourself my chela – that the black memories of your past offences were either hidden from my notice or that I knew and still forgave?
Did you fancy that I connived with them? Foolish . . . .! thrice foolish! It was to help you from your viler Self, to arouse in you better aspirations; to cause the voice of your offended “soul” to be heard; to give you the stimulus to make some reparation . . .  for these only your prayer to become my chela was granted.
We are the agents of Justice, not the unfeeling lictors [2] of a cruel god. Base as you have been, vilely as you have misused your talents . . . blind as you have been to the claims of gratitude, virtue and equity, you have still in you the qualities of a good man – (dormant indeed, so far!) and a useful chela. But how long your relations with us will continue – depends along upon yourself. You may struggle up out of the mire, or glide back into depths of vice and misery now that you stand before your Atma, which is your judge, and which no smiles, nor falsehoods, nor sophistries can deceive.
Hitherto you had but bits of chits [3] from me – and knew me not; now you know me better, for it is I who accuse you before your awakened conscience. You need make no lip-promises to It or me, no half-way confessions. Though . . . you shed oceans of tears and grovel in the dust, this will not move a hair’s breadth the balance of Justice. If you would recover the lost ground do two things:  make the amplest, most complete reparation . . . and to the good of mankind devote your energies . . . Try to fill each day’s measure with pure thoughts, wise words, kindly deeds. I shall neither order, nor mesmerize, nor sway you. But unseen and when you perhaps come – like so many others – to disbelieve in my existence, I shall watch your career and sympathise in your struggles.
If you come out victorious at the end of your probation I shall be the readiest to welcome you. And now – there run two paths before you, choose! When you have chosen you may consult your visible official superior – H.S. Olcott, and I will instruct him thro’ his Guru to guide and send you on . . . .
You aspire to be a missionary of theosophy; be one – if you can be one in fact. But rather than go about preaching with a heart and a life that belie your professions – conjure the lightning to strike you dead, for every word will become your future accuser. Go and consult with Col. Olcott [4] – confess your faults before that good man – and seek his advice.
K. H.
NOTES:
[1] “The Dhammapada”, Theosophy Co., Los Angeles, 139 pp., Chapter 6, p. 17.
[2] Lictors; the lictors were ancient Roman officers who accompanied the chief magistrates in public appearances.
[3] Chits; short notes and hints.
[4] Henry S. Olcott.
000
In September 2016, after a careful analysis of the state of the esoteric movement worldwide, a group of students decided to form the Independent Lodge of Theosophists, whose priorities include the building of a better future in the different dimensions of life.
000