A Film on the Theosophy of the Future
Carlos Cardoso Aveline 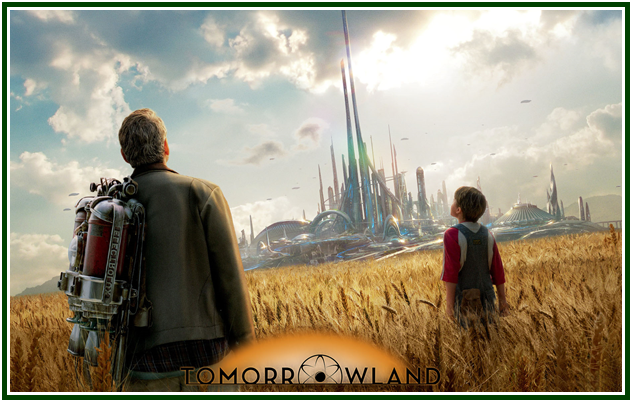 Of great philosophical interest, the science fiction adventure film “Tomorrowland” shows the large-scale karmic effects of human thoughts and the need to be self-responsible about them. [1]
In the film, widespread negative feelings and selfish ideas lead us to the almost certain destruction of civilization. However, it could still be reversed, even in the last minute. And this can be done by the power of positive thinking of those who feel impersonally responsible for the fate of mankind and refuse to give up optimism.
The challenge and the teaching are present in the original writings of theosophy. The use of right thought regarding the future constitutes a decisive tool for changing the collective karma of mankind. The issue of “who’s responsible for the future” is discussed in the book “The Fire and Light of Theosophical Literature” [2]. Our associated websites have various articles on the theme. [3]
Other aspects of  “Tomorrowland” have a deep theosophical interest.
The film suggests the existence of a collectivity of wise souls (a sort of Shangri-La). The Wise Immortals need the cooperation of idealistic citizens (“disciples” and “aspirants to disciples”) who practice self-sacrifice and work solely for the good of mankind.
Taking into consideration that it is a fictional work, the imagery of “Tomorrowland” regarding probation, teachers and learners is essentially compatible with the process of discipleship as described in “The Mahatma Letters”. One instance among many is that, unlike his main disciple, the spiritual Teacher doesn’t get one day older while the decades pass by. Besides, the teacher can instantly materialize anywhere when especially needed.
Nearing its end, “Tomorrowland” shows a widespread awakening of ethical and humanistic consciousness around the globe, which will be enough to avoid the catastrophic end of civilization.
This coincides with one of the main goals of the modern theosophical movement. Helena P. Blavatsky wrote that the victory of human spirit and of universal brotherhood must take place before the end of the present century.
A Disney Production aiming especially at young people, “Tomorrowland” is easy to obtain and constitutes a must and a lesson in altruism for people of all ages, including both experienced theosophists and newcomers to esoteric philosophy.
NOTES:
[1] This 2015 North-American film is directed by Brad Bird, and co-written and produced by Bird and Damon Lindelof. It stars George Clooney, Hugh Laurie, Britt Robertson and Raffey Cassidy.
[2] “The Fire and Light of Theosophical Literature”, Carlos Cardoso Aveline, “The Aquarian Theosophist”, 255 pp., 2013.
[3] See for instance the articles “A Prayer for the World”, “Meditating on Peace in the Middle East” and “Meditation on the Awakening of Mankind”.
000
An initial version of the above text was published in the June 2015 edition of “The Aquarian Theosophist”, pp. 9-10. It had no indication as to the name of the author.
000