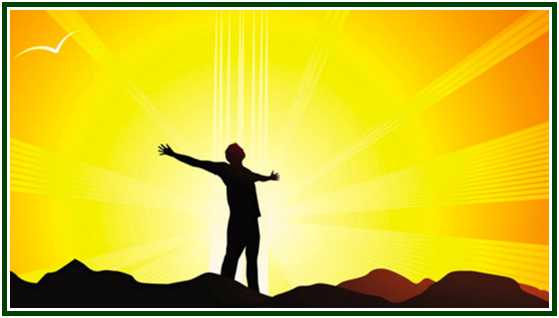 Contentment is generally understood to be a state of satisfaction that arises from the fulfillment of desires. As all objects of desire – even noble ones – have a beginning and an ending, and are subject to change, they are more or less illusionary. The contentment that is reached from their achievement is also temporary and in that sense illusionary.
Rather than pursuing the objects of contentment, consideration should be given to seeking out the spirit of contentment. All teachers of wisdom have said that lasting contentment lies within. Not in the desires held, but rather in the ideas and attitude of mind. The attitude of mind that results in enduring contentment is built on a stable foundation of three ideas.
The first idea is Unity; that we are all interdependent parts of one great whole. Discontentment arises from the idea of separation from or loss of the object desired. How can a person who feels part of all things – and who feels that all things are part of the Self – ever feel separate or discontented? Identification of the mind with the Self of All results in enduring contentment. That Self must be sought for within and beyond those aspects of human nature that are changing and temporary. For It endures forever.
The second idea is Law; that we are responsible for whatever may come that is favorable or unfavorable. Discontentment arises from the idea that the thought and action of someone else or something else is ultimately the cause of individual happiness or unhappiness. Can a human being who trusts in the law of karma and understands that there is no karma unless there is a being to make it and feel its effect ever feel hopeless, helpless, or irresponsible for present conditions or future destiny? In a world where unity is the fundamental fact of life, none can act or receive the results of actions in isolation from other beings.  The results of actions create the conditions necessary to receive the helpful or obstructive effects of the actions of others.  Ideas create the attitude of mind that remains content regardless of what comes, that learns from the actions of others, and that influences decisions on how to react.
The third idea is Evolution; that human progress and contentment is the result of self-induced effort. Discontentment arises from the idea that someone else received a special gift or privilege that was undeserved or unfair, or that personal efforts were ignored or denied out of prejudice, selfishness, or on a whim. How can an individual who understands that there are no special gifts or privileges, and that the advancement, success, and contentment of others, as well as oneself, are the result of merit and the operation of karma, ever feel discontent? If the inevitable karmic result of previous action temporarily obstructs progress and limits faculties and capacities, the unending cycles of evolutionary opportunity and growth are also inevitable under law. All that is needed for contentment, under such circumstances, is the conviction that the best is being done with the opportunities and abilities available to serve and benefit humanity.
As W.Q. Judge wrote:
“The very best I can say to you is that, as you know, all our troubles in life arise from ourselves, no matter how much they may seem to come from the outside; we are all parts of the one great whole, and if you try to centre your mind upon that fact, and to remember that those things that seem to trouble you are really due to your own way of looking at the world and life, you will probably grow more contented in mind. It is your own mind you should watch, and not the circumstances in which you are placed. Others have been in worse circumstances than what you think surround you, and have not been disturbed as you seem to be. It must be, therefore, that it is the way you yourself look at this thing; stop looking at it, then, in that way and look at everything in a contented spirit, feeling sure that they are all more or less illusionary, and you will do better.” [1]
The path of renunciation has sometimes been called the path of woe. However, this highest of spiritual paths is not a path of personal sadness. The willingness to renounce the desire for reward and that taste of satisfaction that arises from the fulfillment of personal desires results from the unconditional, enduring contentment that accompanies self-knowledge of the real inner nature.  If there is any feeling of woe, it is from compassion for those who err and suffer out of ignorance of their divine nature. This empathy for the misery of others does not become discontentment, rather it serves to inspire enthusiasm and devotion to the cause of Theosophy.
NOTE:
[1] “Letters That Have Helped Me”, by W. Q. Judge, The Theosophy Company, Los Angeles, California, 1946, p. 176.
000
On the role of the esoteric movement in the ethical awakening of mankind during the 21st century, see the book “The Fire and Light of Theosophical Literature”, by Carlos Cardoso Aveline.