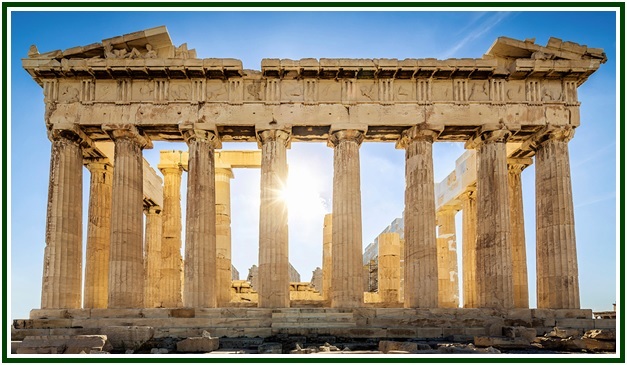 The Parthenon in Greece
0000000000000000000000000000000000000000000
Editorial Note:
History is the human record of
collective Karma. Any accurate vision of the
theosophical movement must include the story
of its survival during the critical years of the
Second World War; and Greece is no exception.
In October 1940, Italian fascist troops
invaded Greece from Albania. Greek armed forces
quickly defeated the fascists; but then the German Nazis
invaded the country and succeeded in dominating it. From
that moment on, Greek population increasingly resisted
the Nazis with guerrilla warfare. Nazi troops left Greece in
October 1944, but their occupation was followed by civil
war between Communists and Democrats. The “Communist
Rebellion” ended in February 1945. The following
testimony is dated March 20, 1945 and describes
the situation faced by theosophists during the
Nazi occupation in the first half of the 1940s. [1]
It was only in the first years of 21st century that a lodge
of the United Lodge of Theosophists (ULT) was created
in Athens. The present document was written by a
member of the Adyar Theosophical Society and published
in June 1945.[2]  While narrating his life in a Nazi
concentration camp, Mr. K. Melissaropoulos mentions
himself in the third person, singular. The short
letter is addressed to the recording secretary in the
international headquarters of the Adyar Society, in India.
(Carlos Cardoso Aveline)
00000000000000000000000000000000000000000000000000
It is with great joy that, after four years of enforced silence, we send you our brotherly greetings from our liberated country.
We wish to protest with all our power to the civilized world and to all honest and free people against the inhuman and barbarous way in which the Germans behaved in our country. Untold destruction has been caused; thousands of innocent men, women and children have been completely wiped out.
Since the invasion of our country by the Germans, all Theosophical activity has been suspended, because every gathering whatsoever was forbidden.  Fortunately, we were able to save most of the furniture of our office and almost the entire library of our Section. But every contact of our Council with the greatest part of our members was interrupted.
Two of the members of our Council, namely the ex-Joint General Secretary, P. Hadjipetros,  and the actual Joint General Secretary, K. Melissaropoulos, were arrested during the last months of the occupation and imprisoned in the Haidari concentration camp.  It was from this camp that the Germans picked an average of fifty persons to shoot every week for the purpose of terrorizing the Greeks who were fighting against them.
Fortunately, our two colleagues have not been executed, but their stay in that prison forced them to live the most terrible days of their life, seeing everyday the most heinous crimes which the S.S. troops committed, with complete disregard of all international laws.
Now that we are liberated, our Council will soon consider the possibility of reestablishing the Greek Branch of The Society though it is expected that we shall meet many difficulties, financial and others.
We shall be very glad to have your news, and, if possible, to be informed about the international activity of our Society during the last four years.
NOTES:
[1] Post-war tensions in Greece would emerge again in 1946. It took a few years more for a peaceful democracy to be established  in 1949-1950.
[2] We reproduce it from “The Theosophist” magazine, Adyar, India, June 1945 edition, pp. 109-110. Original title: “In a Greek Concentration Camp”.
000
In September 2016, after a careful analysis of the state of the esoteric movement worldwide, a group of students decided to form the Independent Lodge of Theosophists, whose priorities include the building of a better future in the different dimensions of life.
000
E-Theosophy e-group offers a regular study of the classic, intercultural theosophy taught by Helena P. Blavatsky (photo).