Galen of Pergamon, Esoteric
Philosophy and the Art of Healing
Carlos Cardoso Aveline 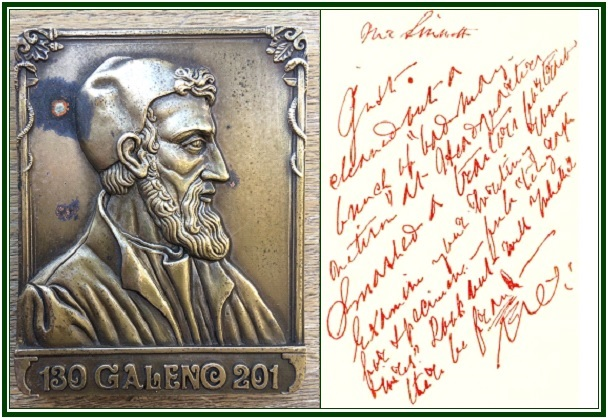 On the left, the portrait of Galen in a Portuguese bronze medal belonging to the library of
the Independent Lodge of Theosophists; on the right, one of the Letters from the Mahatmas.
“Theosophy is that branch of medicine by which
one may rid himself of his sins from time immemorial.”
(A Paramahansa of the Himalayas,
in the text “On What Is Theosophy”)
Students of Theosophy must evaluate the relation between theory and practice in daily life. An honest look at the issue will teach us more than one lesson in modesty.
A Master of the Wisdom once defined Theosophy as a Medicine of the Soul. Spiritual ignorance is a disease suffered by those whose souls are still childish. Divine wisdom heals human beings from within: it opens the door to self-responsibility.
Galen of Pergamon, the famous physician who lived in the Roman world in the second century of present age, wrote an interesting warning to medical doctors. Galen’s words are especially useful to modern theosophists:
“What happens to most of the athletes who have ideas of victory at the Olympic Games, but undergo no training to bring this about, happens also to most physicians. They praise Hippocrates, whom they consider the best of all; but as for making themselves like him,  they will do anything rather than this.”[1]
The idea is Socratic. The right relation between theory and practice is no easy matter.  Humbleness is important in order to be able to serenely acknowledge the distance between the two factors. Once this step is taken, one can slowly, patiently work to reduce the lack of congruence and harmony between his ideals and his daily life.
Tapah, or austerity, will then emerge as a valuable tool in one’s journey. A Mahatma wrote to a lady theosophist who wanted to help mankind:
“Are you ready to do your part in the great work of philanthropy? You have offered yourself for the Red Cross; but, Sister, there are sicknesses and wounds of the Soul that no Surgeon’s art can cure. Shall you help us teach mankind that the soul-sick must heal themselves?” [2]
Another master of the wisdom implicitly defined the theosophical movement as an effort to heal, as he discussed the admission of “difficult” persons in its ranks. He started by saying:
“Nature has linked all parts of her Empire together by subtle threads of magnetic sympathy, and, there is a mutual correlation even between a star and a man; thought runs swifter than the electric fluid, and your thought will find me if projected by a pure impulse”.
A few lines below the master added:
“Understand this and the admission into the [Theosophical] Society of persons often distasteful to you will no longer amaze you. ‘They that be whole need not the physician, but they that be sick’ – is an axiom, whoever may have spoken it.” [3]
A true follower of Hippocrates, Galen of Pergamon teaches that physicians must do more than using the name of the Medicine’s founder. Blind dogmatism does not help. Physicians must develop a proper understanding of the science by being independent philosophers and practicing “rational contemplation”.
The reasoning is valid for modern theosophists in their relation to the masters of Helena Blavatsky and their teachings, given out through her. One can apply Galen’s words to the modern esoteric movement, but replacing the word “Hippocrates” by “Sages”.
Galen writes:
“…It seemed to me that I should seek the cause, whatever it may be, by which, although they all wonder at the man [or at the Sages], they do not read his [or their] writings; or by which, if one of them should chance to read them, he would not understand what was being said; or by which, if he should happen to understand, he would not combine understanding with practice, so as to establish it and make it habitual, finding out, by determination and by ability, all the things that Hippocrates has [ and the Sages have] accomplished and bestowed upon men.” [4]
Instead of merely memorizing a teaching, theosophists must cure themselves from the disease of ignorance and help others do the same.
They can succeed in their task through the healing power of three guiding lights in the search for divine knowledge: altruism, self-responsibility, and an expanding discernment.
NOTES:
[1] From the first paragraph in the essay “That The Best Physician Is Also a Philosopher”, by Galen of Pergamon.
[2] “Letters From the Masters of the Wisdom – Second Series”, Letter 72, p. 129.
[3] “The Mahatma Letters”, Letter 45, pp. 267-268.  In the chronological edition of the Mahatma Letters, see Letter 47. The axiom is present in Matthew 9:12, in the New Testament: “It is not the healthy who need a doctor, but the sick.”
[4] From the essay “That The Best Physician Is Also a Philosopher”.
000
The article “Theosophy or the Medicine of the Soul” was published on the associated websites as an independent text on 08 October 2020, being reproduced from the October 2019 edition of “The Aquarian Theosophist”, pp. 3-5.
000