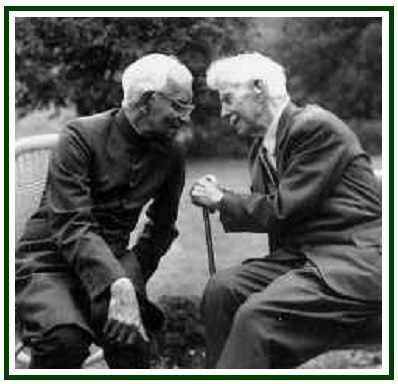 Using a subtle language in the 1960s, Mr. N. Sri Ram, President
of the Adyar Society (left), agreed with E. L. Gardner (right) in that
Leadbeater’s writings are delusional.  (Photo taken in the UK in 1959)
A 2017 Editorial Note:
“We must now be realistic,
or we do the cause great harm.”
(E. L. Gardner, in 1963)
Mr. N. Sri Ram, the president of the Adyar Society between 1953 and 1973, may have forgotten, in the 1960s, that conscious falsehood is not acceptable in theosophy.
Using a subtle, indirect and elegant language, he clearly agreed with E. L. Gardner in that C. W. Leadbeater’s writings are delusional.
Surprisingly enough, however, and perhaps due to some good-willing political calculation, Mr. Sri Ram did not remove the false portraits of imaginary “Masters” from the meeting-rooms of the Esoteric School all over the world, and  preserved the old Egyptian Rite, the Liberal Catholic Church, the Co-masonry and other activities which  are entirely based on the same imaginary clairvoyance.
Sri Ram’s daughter, Mrs. Radha Burnier, led the Esoteric School since 1978 and up to her death in 2013. She presided over Adyar Society since 1980, and generally followed her father’s steps in her policy towards the Besantian frauds. When the end of her physical life came, however, Radha Burnier refused to nominate a successor, and thus closed the cycle of the fake “occult succession” inaugurated by Annie Besant.
The rejection of well-known and clearly documented illusions can take place through a firm top-down decision; it can also occur from the bottom upwards, as in a slow-motion, grassroots awakening.  Decade after decade, this step-by-step process has been happening. Radha’s decision not to establish a “successor” accelerated the process, but did not point to the healthy alternative.
Life is about learning, and the evolution of every theosophical association depends on its ability to seek for actual truth, and give up all known errors and delusions. Such a choice often requires “political courage”. The Adyar Society, the United Lodge of Theosophists and the Pasadena Theosophical Society are certainly no exceptions to the rule. Every group and association has to make difficult choices.
Founded in September 2016, the Independent Lodge of Theosophists aims at placing the search for truth above political and institutional interests. The ILT states that developing an effective discernment between facts and illusion must be a central goal to the theosophical effort.
An important aspect of the following text by Gardner is that it gives a direct testimony as to Mrs. Annie Besant’s final years, and on her karma for having abandoned truth, ethics, and the teachings of true Theosophy.  See on this topic the subtitle “Annie Besant’s Part”, which gives a profound lesson to thoughtful students.
The reader must take into consideration that E. L. Gardner was perhaps the first Adyar Society author – in the second half of the 20th century – to show pseudo-theosophy for what it is. Few historical documents about the 1900-1934 period were available by then to Adyar members. His views were therefore limited.  He did not know, for instance, that the so-called “occult powers” of Mrs. Annie Besant had been false from the very start: she developed them side by side with C.W.  Leadbeater, in mediumistic séances of imaginary contacts with Masters during the 1890s, in the London Lodge of the T.S. and under the leadership of A. P. Sinnett. [1]
Besides being valuable and significant in itself, the effort made by E. L. Gardner in the 1950s and 1960s created the conditions for the vast work developed by Geoffrey Farthing from the 1970s and up to his death in May 2004.  Both theosophists lived in England. The movement owes them a great debt of gratitude.
The original subtitle of Gardner’s text was “Developments in the Theosophical Society”. It was first published in 1963 by the Theosophical Publishing House, TPH (London), as a pamphlet with 23 pages.
(Carlos Cardoso Aveline)
There Is No Religion Higher Than Truth
E.L. Gardner