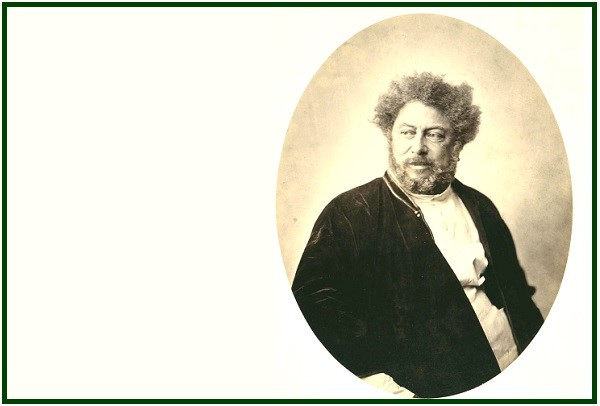 Alexandre Dumas, father (1802-1870)
The five-volume novel “Joseph Balsamo” is part of a larger work by Alexandre Dumas, entitled “The Memoirs of a Physician”.
The story was initially published as a newspaper serialized novel between 1846 and 1849, more than two decades before the foundation of modern theosophical movement in 1875. The fact that its main character Joseph Balsamo, or Alessandro Cagliostro, uses as we will see the term “theosophist” to describe himself indicates the pioneering character of the work.
Whoever looks at the book from a literal point of view can only conclude that Alexandre Dumas is unfair and scarcely truthful regarding masonry and Cagliostro. In order to gain literary success, the writer avoided criticizing the worldly powers of his time. Dumas decided to be politically correct and largely adopted as true in his fiction work the shameless lies fabricated by the Jesuits and the Vatican.
In every historical novel he wrote, Dumas allowed himself complete liberty to create his own facts. Using other words, H.P. Blavatsky said that if seen as a historian, Dumas proves to be more creative than even the famous Baron Munchhausen.[1]
Dumas never pretended to be a historian.
When someone accused him of writing about events which he never really studied, he retorted, in his ironical and candid style:
“If I had studied events, then when should I have found time to write?” [2]
In spite of its obvious limitations, the novel “Joseph Balsamo” contains elements of authentic esoteric philosophy. Dumas freely combines truth and falsehood. Using a deliberate ambiguity to avoid persecution, he expresses a significant amount of true facts in the work, not always in an ostensive way. He studies and describes the facts of human soul, not the facts of history.
The French novelist wrote, ascribing the words to his character Joseph Balsamo:
“…I was a theosophist at last.”
“My journeyings ended; but in truth all that I had seen had awakened in me no astonishment, because for me there was  nothing new under the sun, and in my preceding thirty-two existences I had visited the cities before, through which I lately passed. All that struck me was some change in their inhabitants. Now I would hover over events and watch the progress of man. I saw that all minds tend onward, and that this tendency leads to liberty. I saw that prophets had been raised up from time to time to aid the wavering advances of the human race; and that men, half blind from their cradle, make but one step towards the light in a century. Centuries are the days of nations.”
“Then, said I to myself, so much has not been revealed to me that it should remain buried in my soul; in vain does the mountain contain veins of gold, in vain does the ocean hide its pearls, for the preserving miner penetrates to the bowels of the mountains, the diver descends to the depths of the ocean, but better than the mountain or the ocean, let me be like the sun, shedding blessings on the whole earth.”
“You understand, then, that it is not to go through some masonic ceremonies I have come from the East. I have come to say to you, brethren, take the wings and the eyes of the eagle; rise above the world, and cast your eyes over its kingdoms.”
“Nations form but one vast body. Men, though born at different periods, in different ranks, arrived all in turn at that goal to reach which they were created. They are continually advancing, though seemingly stationary, and if they appear to retreat a step from time to time, it is but to collect strength for a bound which shall them over some obstacle in their way.” [3]
Had Dumas challenged the Jesuits by clearly defending the esoteric tradition, he would have been at least boycotted as an author, and probably arrested, perhaps assassinated. That was not his purpose in life. Yet Dumas’ work has many an interesting page from a theosophical and psychological point of view.
NOTES:
[1] “Collected Writings” of H. P. Blavatsky, TPH, vol. II, p. 130. Title of the article: “Persian Zoroastrianism”.
[2] “Living Biographies of Famous Novelists”, by Henry Thomas and Dana Lee Thomas, Blue Ribbon Books, Garden City, New York, USA, copyright 1943, 1946 edition, 305 pages, see p. 134.
[3] Reproduced from “Joseph Balsamo”, New York, P.F. Collier and Son, 1902, pp. 19-20.  This English version was compared to the original in French, “Joseph Balsamo”, Mémoires d’un Médecin, Paris, Calmann-Lévy, Éditeurs, a five-volume undated edition, see vol. I, pp. 23-24.
000
“Alexandre Dumas Describes Cagliostro” was published in the associated websites on 03 April 2020. An initial version of the article is part of the February 2020 edition of   “The Aquarian Theosophist”, pages 1-3.
000
In French language, see the books “Cagliostro, Le Maître Inconnu” by Marc Haven, and   “Rituel de la Maçonnerie Egyptienne”, by Cagliostro himself.
Read the articles “Was Cagliostro a Charlatan?”, by Helena P. Blavatsky, and “Prince Talleyrand, On Cagliostro”, by William Q. Judge.  In Portuguese language, see “O Mistério de Alessandro Cagliostro”, by Carlos Cardoso Aveline.
000