The Ceaseless Peregrination of
Monads from One Form to Another
Helena P. Blavatsky 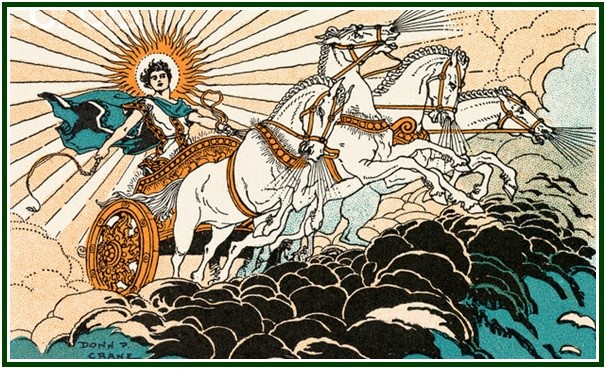 000000000000000000000000000000000000000
A 2018 Editorial Note:
The following paragraphs are reproduced
from the book “Isis Unveiled”, by Helena
P. Blavatsky, volume I, pp. 302-303. [1]
In order to facilitate a contemplative
reading, the two long paragraphs of the
fragment have been divided into smaller ones.
There is a commentary on these paragraphs
in HPB’s book “The Secret Doctrine”, from
which we take the opening quotation below.
(Carlos Cardoso Aveline)
00000000000000000000000000000000000000000000
“The well-known Kabalistic aphorism
runs: ‘A stone becomes a plant; a plant,
a beast; the beast, a man; a man a spirit;
and the spirit a god’. The ‘spark’ animates
all the kingdoms in turn before it enters
into and informs divine man…”.
(Helena Blavatsky, in “The
Secret Doctrine”, volume I, p. 246)
In the shoreless ocean of space radiates the central, spiritual, and Invisible sun. The universe is his body, spirit and soul; and after this ideal model are framed ALL THINGS.
These three emanations are the three lives, the three degrees of the gnostic Pleroma, the three “Kabalistic Faces”, for the ANCIENT of the ancient, the holy of the aged, the great En-Soph, “has a form and then he has no form”.
The invisible “assumed a form when he called the universe into existence” [2] says the Sohar, the Book of splendor. The first light is His soul, the Infinite, Boundless, and Immortal breath; under the efflux of which the universe heaves its mighty bosom, infusing Intelligent life throughout creation.
The second emanation condenses cometary matter and produces forms within the cosmic circle; sets the countless worlds floating in the electric space, and infuses the unintelligent, blind life-principle into every form. The third, produces the whole universe of physical matter; and as it keeps gradually receding from the Central Divine Light its brightness wanes and it becomes DARKNESS and the BAD – pure matter, the “gross purgations of the celestial fire” of the Hermetists.
When the Central Invisible (the Lord Ferho) [3] saw the efforts of the divine Scintilla, unwilling to be dragged lower down into the degradation of matter, to liberate itself, he permitted it to shoot out from itself a monad, over which, attached to it as by the finest thread, the Divine Scintilla (the soul) had to watch during its ceaseless peregrinations from one form to another.
Thus the monad was shot down into the first form of matter and became encased in stone; then, in course of time, through the combined efforts of living fire and living water, both of which shone their reflection upon the stone, the monad crept out of its prison to sunlight as a lichen. From change to change it went higher and higher; the monad, with every new transformation borrowing more of the radiance of its parent, Scintilla, which approached it nearer at every transmigration. For “the First Cause, had willed it to proceed in this order”; and destined it to creep on higher until its physical form became once more the Adam of dust, shaped in the image of the Adam Kadmon.
Before undergoing its last earthly transformation, the external covering of the monad, from the moment of its conception as an embryo, passes in turn, once more, through the phases of the several kingdoms.
In its fluidic prison it assumes a vague resemblance at various periods of the gestation to plant, reptile, bird, and animal, until it becomes a human embryo. [4] At the birth of the future man, the monad, radiating with all the glory of its immortal parent which watches it from the seventh sphere, becomes senseless. [5] It loses all recollection of the past, and returns to consciousness but gradually, when the instinct of childhood gives way to reason and intelligence.
After the separation between the life-principle (astral spirit) and the body takes place, the liberated soul – Monad, exultingly rejoins the mother and father spirit, the radiant Augoeides, and the two, merged into one, forever form, with a glory proportioned to the spiritual purity of the past earth-life, the Adam who has completed the circle of necessity, and is freed from the last vestige of his physical encasement. Henceforth, growing more and more radiant at each step of his upward progress, he mounts the shining path that ends at the point from which he started around the GRAND CYCLE.
NOTES:
[1] In order to see the first volume of “Isis Unveiled” in our websites, click here. (CCA)
[2] “The Sohar”, iii. 288; “Idra Suta”. (HPB)
[3] Regarding Lord Ferho, HPB writes on page 228, volume II, “Isis Unveiled”: “The Supreme Lord of splendor and of light, luminous and refulgent, before which no other existed, is called Corona (the crown); Lord Ferho, the unrevealed life which existed in the former from eternity; and Lord Jordan – the spirit, the living water of grace. He is the one through whom alone we can be saved; and thus he answers to the Shekinah, the spiritual garment of En-Soph, or the Holy Ghost.” See the volume II of “Isis” here.  (CCA)
[4] Everard: “Mystères Physiologiques”, p. 132. (HPB)
[5] See Plato’s “Timæus”. (HPB)
000
On 14 September 2016, after examining the state of the esoteric movement worldwide, a group of students decided to found the Independent Lodge of Theosophists. Two of the priorities adopted by the ILT are learning from the past and building a better future.
000
E-Theosophy e-group offers a regular study of the classic, intercultural theosophy taught by Helena P. Blavatsky (photo).