Fourth Edition, With the Letters
To and About Mrs. Laura C. Holloway
C. Jinarajadasa (Ed.) 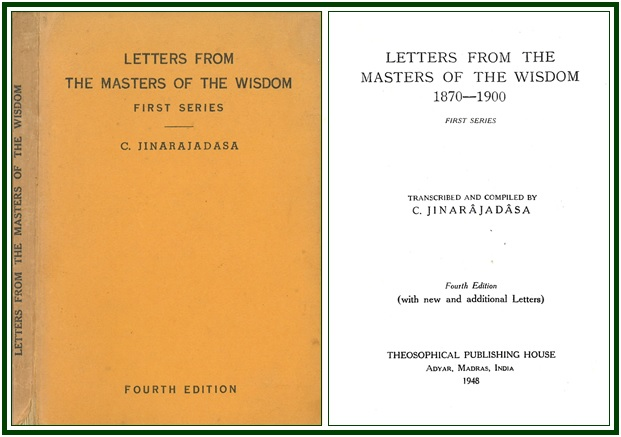 Front cover and opening page of the present 1948 edition
000000000000000000000000000000000000000
A 2017 Editorial Note:
We reproduce here the fourth edition
of “Letters From the Masters of the Wisdom –
First Series”, which was published in India by
the TPH in 1948. This edition includes the
significant collection of Letters To and About
Mrs. Laura C. Holloway, starting on page 197,
under the title of “Additional  Letters”.
(Carlos Cardoso Aveline)
000000000000000000000000000000000000000000000
LETTER 1 [1]
FROM THE MAHA-CHOHAN
To A. P. Sinnett
An abridged version of the view of the Chohan on the T.S. from his own words as given last night. My own letter, the answer to yours, will shortly follow.  K.H.
The doctrine we promulgate being the only true one, must, supported by such evidence as we are preparing to give become ultimately triumphant as every other truth. Yet it is absolutely necessary to inculcate it gradually, enforcing its theories, unimpeachable facts for those who know, with direct inferences deduced from and corroborated by the evidence furnished by modem exact science.
(….)
Click Here to Read “Letters From the
Masters of the Wisdom – First Series”
NOTE:
[1] In the section “Notes” at the end of the book, the reader will find references and where possible explanations regarding the nature of each letter.
000
Readers are invited to see in our associated websites the book “Letters From the Masters of the Wisdom – Second Series”, by C. Jinarajadasa (Ed.).
The book “The Mahatma Letters”, edited by A. Trevor Barker, is also available at the same websites.
000
In September 2016, after a careful analysis of the state of the esoteric movement worldwide, a group of students decided to form the Independent Lodge of Theosophists, whose priorities include the building of a better future in the different dimensions of life.
000