Born on 22 February 1455, John Reuchlin
Paved the Way to Luther and Other Reformers
Carlos Cardoso Aveline 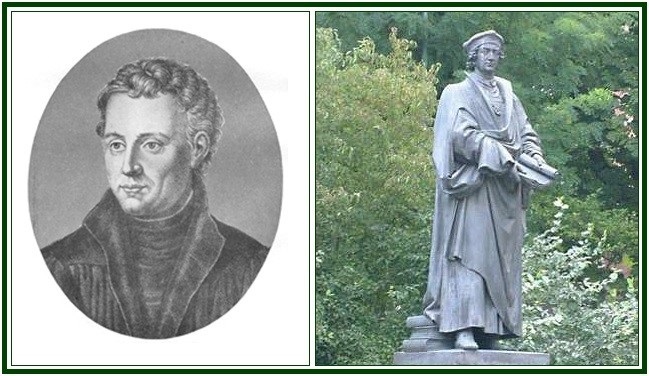 Reuchlin, a student of the Jewish tradition, and his statue at his hometown
“…John Reuchlin (…), author of the
‘Mirific Word’, [was] the teacher and instructor
of Erasmus, Luther, and Melancthon”
(Helena P. Blavatsky)
German humanist and kabalist John Reuchlin was born under the sign of Pisces. He came into the physical world on 22nd February 1455 and died five centuries ago in 1522. [1]
Among the twelve zodiacal signs, Pisces is considered “the dreamer”. The right kind of dream prepares effective action. Reuchlin worked on the abstract level of mystic oneiric action as a pioneer of Martin Luther’s Reformation. H.P. Blavatsky calls him “the father of the Reformation”.[2]  As a mystic, Reuchlin paved the way to that change on a philosophical level. Helena Blavatsky quotes from the Royal Masonic Cyclopaedia’s entry on “Rosicrucianism”:
“The Kabalistic reveries of a John Reuchlin led to the fiery action of a Luther (…).”[3]
The episode indicates how social change is really made. It has to begin on the abstract levels of “reverie” or dream. Francis Barham writes in his classic 1843 work “The Life and Times of John Reuchlin”:
“All changes and revolutions have begun in the metaphysical experiences of individuals, and can only be explained by them.” [4]
A student of Jewish tradition, a scholar in the Hebrew language, Reuchlin was a forerunner of universal brotherhood.  Writing about the History of Christianity, H.P. Blavatsky says in “Isis Unveiled”:
“Magic, in all its aspects, was widely and nearly openly practiced by the clergy till the Reformation. And even he who was once called the ‘Father of the Reformation’, the famous John Reuchlin [5], author of the ‘Mirific Word’ and friend of Pico di Mirandola, the teacher and instructor of Erasmus, Luther, and Melancthon, was a kabalist and occultist.” [6]
Not all Reformation movement was Lutheran, of course. Unlike Martin Luther, the Amish and Hutterites do not adopt a top-down structure for their Churches, have no professional priests and do not believe in State-sponsored churches.
While the Lutheran churches (and some Mennonites) did the same as the Vatican in supporting Adolf Hitler’s crimes in Germany, the Amish and Hutterites traditionally shun all violence and war and are radically nonviolent. [7]
They do not adhere to the cult of machines. They reject the blind worship of technology, which was central to Nazism. The fact that the Nazis adored mechanical instruments while despising actual life is a warning to us that should not be forgotten in our century.
The Hutterites and the Amish consistently refuse to participate in military conflicts of any kind. They try to live instead in the unbureaucratic spirit of the original Christian teachings.
Living in the 15th and 16th centuries, Reuchlin narrowly escaped condemnation on the part of the Catholic clergy. Erasmus of Rotterdam was among those who helped protect him from persecution, and gave him valuable advice as how to keep to essentials and avoid causing unnecessary irritation among narrow-minded monks.
Francis Barham shows the role played by Reuchlin in protecting and preserving the Jewish literature:
“In his ardent pursuit of theology and universal literature, Reuchlin especially distinguished himself by his knowledge of the Hebrew and Cushite languages, no less than those of Greece and Rome. He retrieved the oriental as well as the classical sciences. It is thus to Reuchlin that we are mainly indebted for the revival of Hebrew and Cabalistic literature in Europe. He himself was the principal Hebrew scholar of his day, and composed Hebrew grammars and dictionaries, which have been rarely excelled by subsequent authors. Besides this, he was instrumental in rescuing the Hebrew manuscripts from the flames, and thus preserving the literature of the Jewish nation.” [8]
Reuchlin was one of the great theosophists of all time. His life demonstrates the best way to stimulate human progress: authentic outward improvement must come from the soul. The true spiritual light smoothly irradiates from within. The entire tree of life emerges little by little from the creative heart of a small seed.
NOTES:
[1] Source of date, “Collected Writings”, H. P. Blavatsky, volume XIV, and Encyclopaedia Britannica. Reuchlin is also known as “Johann”.
[2] “Collected Writings”, H. P. Blavatsky, TPH, USA, volume XIV, p. 169.
[3] See her article “The Trial of the Sun Initiate” in “Collected Writings”, H. P. Blavatsky, TPH, USA, volume XIV, p. 266.
[4] “The Life and Times of John Reuchlin, or Capnion, the Father of the German Reformation”, by Francis Barham, Esq., London: Whittaker and Co., Ave Maria Lane, 1843, 284 pp., see p. 18.  H.P. Blavatsky refers to this same work on note 5, below. The book is available at our associated websites.
[5] NOTE BY HPB: Vide the title-page on the English translation of Mayerhoff’s “Reuchlin und Seine Zeit”, Berlin, 1830. “The Life and Times of John Reuchlin, or Capnion, the Father of the German Reformation”, by F. Barham, London, 1843.
[6] “Isis Unveiled” Volume II, by Helena P. Blavatsky, p. 20.
[7] Regarding the Anabaptists, click to see the article “The Practical Philosophy of the Amish”.
[8] “The Life and Times of John Reuchlin, or Capnion, the Father of the German Reformation”, by Francis Barham, Esq., London: Whittaker and Co., 1843, see p. 7.
000
An initial and anonymous version of the above article is part of the February 2018 edition of “The Aquarian Theosophist”, pages 15-16.  It was published as an independent text in our associated websites on 22 February 2019, and expanded by Carlos on 8 June 2019.  It can also be read at our blog in “The Times of Israel”.
000
On 14 September 2016, after examining the state of the esoteric movement worldwide, a group of students decided to found the Independent Lodge of Theosophists. Two of the priorities adopted by the ILT are learning from the past and building a better future.
000