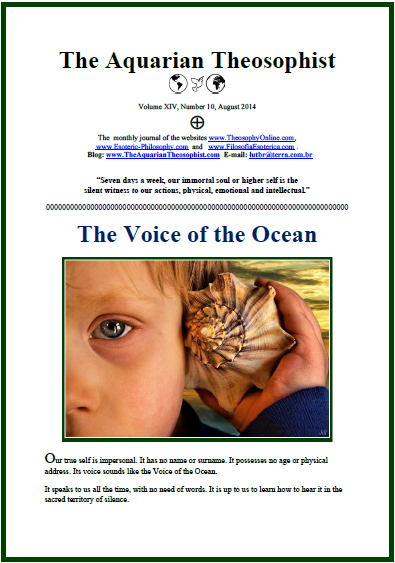 The opening sentence of the present edition says:
“Seven days a week, our immortal soul or higher self is the silent witness to our actions, physical, emotional and intellectual.”
On page 2 there is a short text entitled “Respect for Truth Can Be Severe”.  On p. 3, Robert Kitto, from the UK, writes the note “A Timely Book for the New Age”. Then we have the guiding lines for a new page on Facebook, named “United Lodge of Theosophists”.
On p. 5, “The Land of Israel: The Best Way to Obtain Peace?”. The reader will see “Russia: Ildar Khanov and His Temple of All Religions” on p. 6. The article “A Few Thoughts Along the Road” will be found on pp. 7-8.
Other topics in the August edition include:
* The Bliss in the Absence of Noise;
* The Daily Dawn of Mutual Help;
* What We Really Are: of Unity and Sacredness;
* Albert Einstein and the Search for Knowledge;
* The Invisible Making of the Future;
* Blavatsky Discusses the Intelligence of the Mimosas;
* On the Vitality of the ULT and the Theosophical Movement; and
* On the Proem of  The Secret Doctrine, an online book by Steven H. Levy.
The 18 pp. edition includes the  List of New Texts in www.TheosophyOnline.com and its associated websites.
Click here to see the August 2014
edition of “The Aquarian Theosophist”
000
You can find the entire collection of “The Aquarian Theosophist” in our associated websites.
000
On the role of the esoteric movement in the ethical awakening of mankind during the 21st century, see the book “The Fire and Light of Theosophical Literature”, by Carlos Cardoso Aveline.