A Few Paragraphs From a
Commentary to the Yoga Sutras
I.K. Taimni 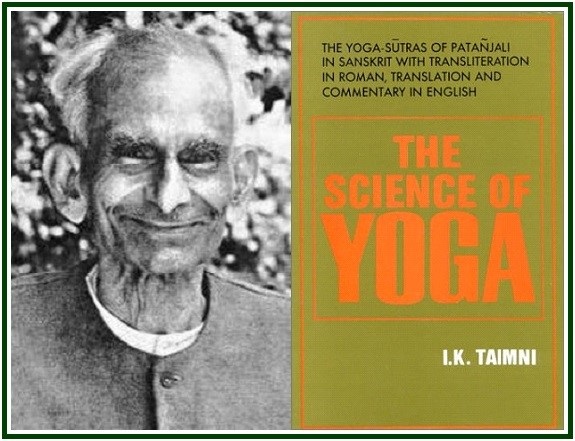 Dr. IK Taimni and the front cover of his good version of the Yoga Sutras
A 2020 Editorial Note:
Upon considering the topic of Tapas (Tapah) or austerities, one might observe these words from a Master, in Letter XLIX of the Mahatma Letters:
“The illumination must come from within. Till then no hocus pocus of incantations, or mummery of appliances, no metaphysical lectures or discussions, no self-imposed penance can give it. All these are but means to an end, and all we can do is to direct the use of such means as have been empirically found by the experience of ages to conduce to the required object. And this was and has been no secret for thousands of years. Fasting, meditation, chastity of thought, word, and deed; silence for certain periods of time to enable nature herself to speak to him who comes to her for information; government of the animal passions and impulses; utter unselfishness of intention, the use of certain incense and fumigations for physiological purposes, have been published as the means since the days of Plato and Iamblichus in the West, and since the far earlier times of our Indian Rishis. How these must be complied with to suit each individual temperament is of course a matter for his own experiment and the watchful care of his tutor or Guru. Such is in fact part of his course of discipline, and his Guru or initiator can but assist him with his experience and will power but can do no more until the last and Supreme initiation.” [1]
The following fragment from the book “The Science of Yoga” [2] stimulates students to further reflection on self-knowledge and self-control. Numbers of pages are indicated after each fragment.
(Carlos Cardoso Aveline)
The Role of Tapas in Raja Yoga
I.K. Taimni
* Tapas is a very comprehensive term and has really no exact English equivalent. It combines in itself the significations of a number of English words: purification, self-discipline, austerity. The word stands for a class of various practices the object of which is to purify and discipline the lower nature and to bring the vehicles of the Jivatma [manifested Atma, individual soul] under the control of an iron will. (p.225)
* The meaning of the word is probably derived from the process of subjecting alloyed gold to strong ‘heating’ whereby all the dross is burnt off and pure gold is left behind. In a way the whole Science of character-building whereby we purify and bring under control our lower vehicles may be considered as a practice of Tapas but in the orthodox sense the word “Tapas” is used particularly for some specific exercises adopted for the purification and control of the physical body and the development of will-power. (p.225)
* The systematic practice of Tapas generally begins with simple and easy exercises which require the exertion of will-power and is continued by progressive stages with more difficult exercises, the object of which is to bring about the dissociation of the vehicle from consciousness. (p.226)
* In the case of the ordinary man the consciousness is to a great extent identified with the vehicle through which it works. The practice of Tapas gradually loosens up this association, enables the consciousness to be partially separated from the vehicle and this progressive awareness of the vehicle as part of the ‘not-Self’ means attenuation of ‘Asmita’ or ‘I am this’ consciousness. It is only when this power to dissociate consciousness from the vehicles has been acquired to some extent that the “Sadhaka” [the practitioner] can effectively purify and control the vehicles and use them for the purposes of Yoga. (p.226)
* The Puranas are full of stories of people who obtained all kinds of Siddhis by performing austerities of various kinds and thus propitiating different deities. Those stories may or may not be true but that Tapas leads to the development of certain kinds of occult powers is a fact well known to all students of Yoga. The important point to be noted in this connection is that the Siddhis acquired by this method, unless they are the result of the general unfoldment of consciousness by the practice of Yoga, are of a restricted nature and do not last for more than one life. And it frequently happens that the person who acquires such a Siddhi, being morally and spiritually undeveloped, misuses it, thus not only losing the power but bringing upon himself a lot of suffering and evil Karma. [3] (p.382)
NOTES:
[1] “The Mahatma Letters”, Letter XLIX, or 49, p. 283. See also the article “How the Mysteries Are Taught”. (CCA)
[2] “The Science of Yoga”, by I.K. Taimni, TPH, India, eighth reprint, 1993, 448 pages. Most of these paragraphs by I.K. Taimni are also published under the title “The Role of Tapas in Raja Yoga” at the September 2019 edition of “The Aquarian Theosophist”, pp. 6-7. (CCA)
[3] The goal of the student who has a reasonable amount of good sense is indeed far away from egotistic or individualistic attempts to “develop occult powers”. The well-informed truth-seeker aims instead – through the moderate use of austerities – at obtaining a balanced control and intelligent use of those mental and emotional powers which he already has, and which need improvement. A gradual expansion of the inner potentialities possessed by the average citizen will occur naturally if his goals are noble. There is no need to seek for them as isolated goals – an unfortunate practice whose effects are often disastrous. His horizon and potentialities will slowly widen in their own time once he can use his present and common faculties in wise, altruistic ways. See the texts “How to Develop Occult Powers” and “The Awakening of the Third Eye”. (CCA)
000
The above article was published by the associated websites on 27 October 2020.
000
Examine the articles  “From Ritualism to Raja Yoga”, “The Awakening of the Third Eye”, “Good Sense in Approaching Raja Yoga” and “How to Develop Occult Powers”.
000

Regarding the path to wisdom and happiness, one should remember this phrase by Helena Blavatsky (photo): “Deserve, then desire”.
000