And the Consciousness of the Initiates
Helena P. Blavatsky 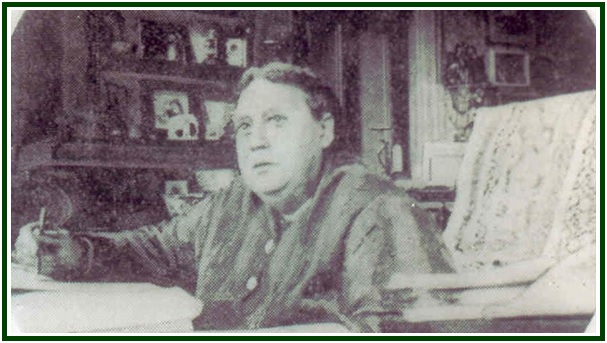 Helena Blavatsky (1831-1891), working in her office
The “Mystery of Buddha” is that of several other Adepts – perhaps of many. The whole trouble is to understand correctly that other mystery: that of the real fact, so abstruse and transcendental at first sight, about the “Seven Principles” in man, the reflections in man of the seven powers in Nature, physically, and of the seven Hierarchies of Being, intellectually and spiritually.
Whether a man – material, ethereal, and spiritual – is for the clearer comprehension of his (broadly-speaking) triple nature, divided into groups according to one or another system, the foundation and the apex of that division will be always the same. There being only three Upadhis (bases) in man, any number of Koshas (sheaths) and their aspects may be built on these without destroying the harmony of the whole. Thus, while the Esoteric System accepts the septenary division, the Vedantic classification gives five Koshas, and the Taraka Raja Yoga simplifies them into four – the three Upadhis synthesized by the highest principle, Atman.
That which has just been stated will, of course, suggest the question: “How can a spiritual (or semi-spiritual) personality lead a triple or even a dual life, shifting respective ‘Higher Selves’ ad libitum, and be still the one eternal Monad in the infinity of a Manvantara?”
The answer to this is easy for the true Occultist, while for the uninitiated profane it must appear absurd. The “Seven Principles” are, of course, the manifestation of one indivisible Spirit, but only at the end of the Manvantara, and when they come to be re-united on the plane of the One Reality, does the unity appear; during the “Pilgrim’s” journey the reflections of that indivisible One Flame, the aspects of the one eternal Spirit, have each the power of action on one of the manifested planes of existence – the gradual differentiations from the one unmanifested plane – on that plane namely to which it properly belongs.
Our earth affording every Mayavic condition, it follows that the purified Egotistical Principle, the astral and personal Self of an Adept, though forming in reality one integral whole with its Highest Self (Atman and Buddhi) may, nevertheless, for purposes of universal mercy and benevolence, so separate itself from its divine Monad as to lead on this plane of illusion and temporary being a distinct independent conscious life of its own, under a borrowed illusive shape, thus serving at one and the same time a double purpose: the exhaustion of its own individual Karma, and the saving of millions of human beings less favored than itself from the effects of mental blindness.
If asked: “When the change described as the passage of a Buddha or a Jivanmukta into Nirvana takes place, where does the original consciousness which animated the body continue to reside – in the Nirvani or in the subsequent reincarnations of the latter’s ‘remains’ (the Nirmanakaya)?” the answer is that imprisoned consciousness may be a “certain knowledge from observation and experience”, as Gibbon puts it, but disembodied consciousness is not an effect, but a cause.
It is a part of the whole, or rather a Ray on the graduated scale of its manifested activity, of the one all-pervading, limitless Flame, the reflections of which alone can differentiate; and, as such, consciousness is ubiquitous, and can be neither localized nor centered on or in any particular subject, nor can it be limited.
Its effects alone pertain to the region of matter, for thought is an energy that affects matter in various ways, but consciousness per se, as understood and explained by Occult philosophy, is the highest quality of the sentient spiritual principle in us, the Divine Soul (or Buddhi) and our Higher Ego, and does not belong to the plane of materiality.
After the death of the physical man, if he be an Initiate, it becomes transformed from a human quality into the independent principle itself; the conscious Ego becoming Consciousness per se without any Ego, in the sense that the latter can no longer be limited or conditioned by the senses, or even by space or time.
Therefore it is capable, without separating itself from or abandoning its possessor, Buddhi, of reflecting itself at the same time in its astral man that was, without being under any necessity for localizing itself. This is shown at a far lower stage in our dreams. For if consciousness can display activity during our visions, and while the body and its material brain are fast asleep – and if even during those visions it is all but ubiquitous – how much greater must be its power when entirely free from, and having no more connection with, our physical brain.
000
The article “The Seven Principles” is published in the associated websites since 29 February 2020. It was reproduced from the “Collected Writings”, Helena P. Blavatsky, T.P.H., volume XIV, pp. 386-387. It is also part of the May 2018 edition of “The Aquarian Theosophist”. We divided the text into small paragraphs in order to facilitate its contemplative reading.
000
You may like to read the texts “The Seven Principles of Consciousness”, “The Seven Principles of the Movement”, and “Antahkarana, the Bridge to Sky”.
000