In Reply to a Theosophical
Attack on Mrs. A. L. Cleather’s Books
Various Authors 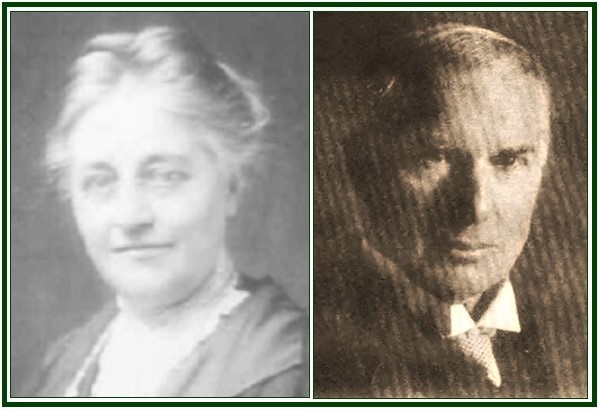 Mrs. Alice Leighton Cleather, the British theosophist, and Mr.
William B. Pease, of the Victoria Lodge – Independent, Canada
00000000000000000000000000000000000000000000
A 2021 Editorial Note:
The editors are grateful to the Edmonton
Theosophical Society, of Edmonton city, Canada,
for sending them a PDF copy of the following 18-page
pamphlet. The document was first published by the H.P.B.
Library in Victoria city, British Columbia, Canada, in 1924.
000000000000000000000000000000000000000000000000000
Unpublished Letters in Reply to a
Theosophical Attack on Mrs. A.L. Cleather’s Books
INTRODUCTION
In the magazine Theosophy, of Los Angeles, California, for October, 1923, an editorial appeared entitled “Mrs. Cleather’s Occultism”, in which two of her three books on H. P. Blavatsky were made the pretext for a personal attack of an unjust and even virulent character. It has always been the policy of Theosophy, and the United Lodge of Theosophists, who publish it, to preserve a strict anonymity, not only in the magazine, but even in private correspondence; also they refuse to publish any replies to their statements. Mrs. Cleather very properly declined to take any notice of the attack; but it was felt that some protest ought to be made, not only in the interests of truth and justice, but also because in the Letter from H.P.B.’s Master to her E.S. students, which Mrs. Cleather quotes as a frontispiece to A Great Betrayal, “a valiant defence of those who are unjustly attacked” is expressly enjoined.
Click to read the full pamphlet
“Unpublished Letters in Reply to…”
000
The above pamphlet was published by the associated websites on 22 June 2021.
000
Click to see the book “H.P. Blavatsky: A Great Betrayal”, by Alice Leighton Cleather.
Read the article “W. Q. Judge, A. Besant and Imaginary Contacts With Masters”, by the same author.
Take a look at books and articles by Alice Leighton Cleather.
000