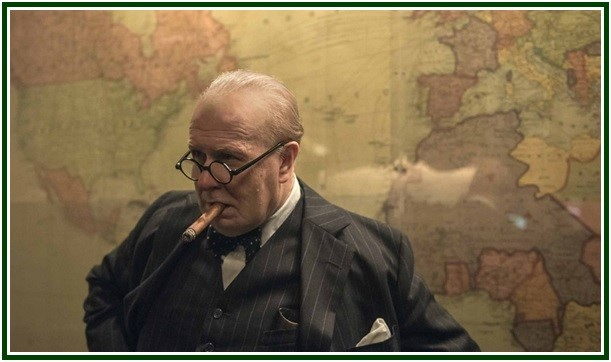 Winston Churchill, interpreted by Gary Oldman in the film “Darkest Hour”
The 2017 film “Darkest Hour” examines testing moments in the life of Winston Churchill and a decisive page in the evolution of mankind. [1]
Contrasting with its title, this is one of the most brilliant movies made about the Second World War. It contains important reflections on the role of public opinion in History, and the duty of political leaders and heads of state.
A true work of art, the film takes the United Kingdom as an example to show the deadly duel between truth and falsity in human heart and public life, a struggle very much alive in the 21st century, when “public opinion” is easily fabricated in most countries by propaganda campaigns acting on conscious and subconscious levels of the mind.
The challenge of preserving good sense and discernment while avoiding collective illusions is not unknown to theosophists, for a Master of the Wisdom says in “The Mahatma Letters”:
“…In the ideas of the West, everything is brought down to appearances even in religion.”
And the teacher proceeds:
“A confessor does not inquire of his penitent whether he felt anger, but whether he has shown anger to anyone. ‘Thou shalt in lying, stealing, killing, etc. avoid being detected’ – seems to be the chief commandment of the Lord gods of civilization – Society and Public opinion.” [2]
Many a despicable project is presented as altruistic with the help of propaganda techniques. Most noble efforts are easy to attack before the “public opinion”.  Therefore citizens of good will must be indifferent to applause and criticism.  The practical consequences are unavoidable. In Mahatma Letters we read that the Initiates in wisdom are “utterly devoid of that sense of the ridiculous which prompts the Western mind to caricature the best, the noblest aspirations of mankind.” A Yogi, says a Master, can’t feel “offended or flattered by the world’s opinion”. [3]
Another master of the Eastern wisdom recommended to a lay disciple:
“Fear not, immortal man, scorn the evil whispers of the double-visaged Janus called public opinion.”[4]
According to the Initiates, “the tribunal of Public opinion” has scarce legitimacy and is the “most flippantly cruel, prejudiced and unjust of all tribunals.” [5]
In the beginning of the second world war, Winston Churchill challenged such a tribunal, as he insisted in the “strange idea” that people of good will should actually defend the United Kingdom and Western civilization against Nazi aggression.
True sages and statesmen unmask collective ignorance.
In 1939-1940, appeasers dominated the public opinion. Hitler seemed invincible. Making peace with Nazi Government in Berlin was – from the point of view of mental laziness and moral defeat – the only thing to do. Winston Churchill was therefore seen as a madman for daring to resist, and his ideas were labelled as absurd at best.
“Darkest Hour” is highly recommended for theosophists and friends of mankind who seek for truth and adopt as their own the probationary task of challenging false consensus.
The story of the film shows how honesty and moral courage defeat political correctness. It demonstrates the importance of thinking by oneself, and teaches one or two lessons in advanced esoteric philosophy. It sets an example to follow in our century, in philosophical and theosophical associations as in every department of life.
NOTES:
[1] Available in DVD. 125 minutes. Starring Gary Oldman as Winston Churchill. Director: Joe Wright.
[2] “The Mahatma Letters”, p. 233.
[3] “The Mahatma Letters”, p. 224.
[4] “Letters From the Masters of the Wisdom – Second Series”, 1948 edition published online, see Letter 10, p. 28. In the 1973 edition, TPH, it is the same page.
[5] “Letters From the Masters of the Wisdom – First Series”, 1948 edition published online, see Letter 7, p. 31. In the 1973 edition, TPH, it is Letter 7, p. 28.
000
Click to watch the trailer of the film “Darkest Hour”.
000
An initial version of the above article was published at “The Aquarian Theosophist”, June 2018, pp. 6-7. It had no indication as to the name of the author. Original title: “Churchill and the Public Opinion”.
“Churchill Challenges Public Opinion” was published in our associated websites as an independent article on the 1st of October, 2018.
000
Click to see the articles “Freedom From Mind Manipulation”, “The Power of Suggestion”, and “Freud on Freedom From Delusion”.
Examine “The Process of Suggestion”, “The World War in Our Minds”, “Neptune, a Mystery In Front of Us”, “Theosophy, on Alcohol and Drugs”, and “Awakening from the Opium Wars”.
000